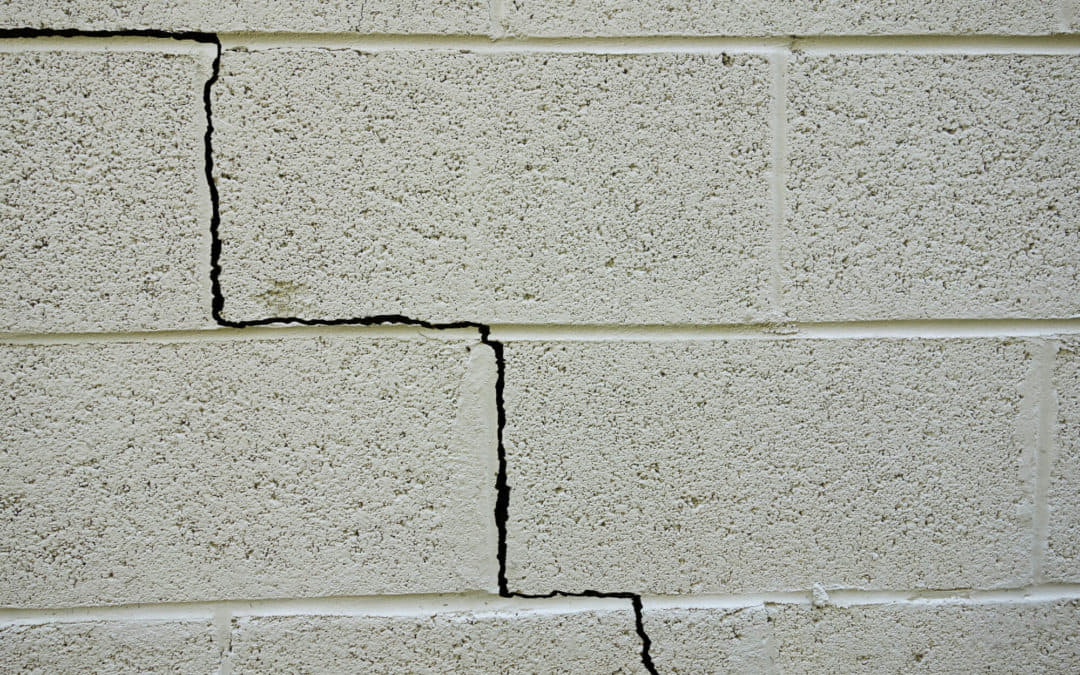 House settling vs foundation problems: how do you know the difference? Most people probably have heard someone say, “Oh, it’s just the house settling” after a thud or a creak. A real settling house means the soil under the foundation is shifting to accommodate the home’s weight and nature’s weather conditions. However, other signs, such as water spots on the concrete and cracks in the foundation or walls could mean there are problems.

But how can you tell the difference between when foundation issues are from normal house settling and when they are indicative of potentially major foundation problems?

Just like when you walk on the sand at a beach, the pressure from the weight of a house compacts and diffuses the soil underneath it. Before a concrete foundation gets poured, the dirt on which it will sit is compacted as much as possible to remove pockets. Soil can shift into any air pocket, which changes the layout of the ground under the foundation. Little shifts here and there aren’t a big deal. You don’t need to worry that your house suddenly will tilt 45 degrees or sink a foot lower. Numerous factors affect settling, including the temperature (both inside and out), moisture levels (both inside and out), the type of concrete used, and groundwater levels.

Initial settling of a new foundation happens during approximately the first three years after the house is built. If the contractors did their job correctly, taking geographical soil locations into account, this is all that should happen. However, if you have waterproofing issues, more-than-normal damage may occur.

It is probable you won’t notice anything out of the ordinary during regular settling. If something does show up, it likely will be a few shallow cracks. As long as these cracks do not get longer, deeper or wider, there’s not much to worry about. Larger cracks should be sealed by professionals, but you can handle these tiny cracks yourself with the proper materials.

Even if no signs of foundation settling have cropped up, if your home has water leakage issues in the basement, there will be future problems. When groundwater, rain, or melting snow saturates the soil under the foundation, the dirt swells and shifts, creating pressure against the foundation and basement walls, and creating pockets within the soil.

Water spots on the concrete and cracks in the foundation or walls usually are the first signs that water has infiltrated your home. There also are many signs to look for above the basement level: sticking doors or doors that won’t close all the way; uneven windowsills and doorjambs; cracked windows; major sheetrock cracks; and ceiling cracks on the upper level of your home.

To Repair or Not to Repair

The answer to this question is “always repair.” Fixing problems now will save you future hassles from even bigger problems. Hire a company that specializes in foundation repair to assess what needs to be repaired and how to stop water from entering the basement so additional damage doesn’t happen. Repairing obvious damage won’t help if you don’t stop the source of the problem.

If the basement walls are bowing, wall anchors and carbon fiber straps will help to reinforce the walls. Helical piers and tie-backs are beams that are anchored to the foundation from the outside to support the foundation. Slabjacking involves expanding foam piped under the foundation to fill in pockets and reduce soil shifting.

To reduce moisture in the air, run dehumidifiers that are the appropriate sizes for the basement’s square footage. Be conscious of ventilation. If it starts getting too humid downstairs, open a window or door to allow better airflow.

Fix It Right with Acculevel

If your home is older than a few years or if it’s new and you’re already seeing some of the problems listed above, it’s time to give us a call. Family owned and operated, Acculevel has been specializing in foundation and basement repair since 1996. Our foundation repair experts will take a look at your home and be honest about what should be done to fix existing problems and prevent future issues. We don’t believe in price gouging, but we do believe in being honest and only doing necessary work. If you live in the Midwest and would like an estimate, please call 866-669-3349 or email us at [email protected].