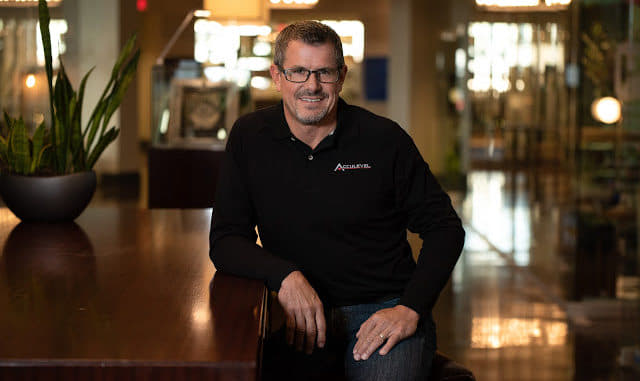 Spring is officially here, and sometimes those April showers bring hidden problems with foundations or crawl spaces to the surface. If you suspect that your foundation or crawl space has been compromised and you need to consult with an expert in basement waterproofing, slab concrete, foundation work and foundation inspection, look no further than Acculevel.

Acculevel, headquartered in Rossville, Indiana, is a family-owned and operated company that has been specializing in foundation waterproofing and repairing cracked foundations, basement sealants, basement walls, concrete foundation piers, slab jacking, concrete slabs and other related repair work since 1996.

Founder and CEO Andy Beery prides his leadership team and crew on being trusted basement, crawl space and foundation improvement contractors that have built their reputation on being honest and transparent with their customers.

Acculevel has helped thousands of its customers with reconditioning crawl spaces and basements and preventing flooding and mitigating mold. They are trusted by homeowners to protect their homes, improve the energy efficiency of their home and ensure the safety and longevity of their property.

“We cover a large geographic area regionally from Illinois, Michigan, Ohio and most of Kentucky,” Beery said. “The easy way to explain to a homeowner what we do is anything from your main level floor on down, if there’s a problem, we can likely take care of it.”

Acculevel employs 40 people and has localized project managers living and working throughout its service areas.

“Our crews come out of our shop/office in Rossville,” Beery said. “It’s easier for us to manage from a staffing and inventory standpoint out of one location. We can efficiently cover a 3- to 4-hour radius from our location. Should we want to expand outside of that radius later on, we may have to consider adding another location.”

Beery and his wife, Sharla, are Rossville natives where they have raised their daughter and two sons. Beery’s sons, Neil and Nolan, are both involved with the family’s business. After graduating from Rossville High School, Beery worked in construction, mastering his concrete work skills and worked for his father’s construction company, Beery Construction, before going out on his own.

Other than water table issues and acts of nature that can affect the foundation or concrete slabs, Beery explained that he and his crew come across a lot of foundation house repair jobs that stem from what’s occurring underneath the ground that the home is built upon.

“If the fill wasn’t compacted properly or compacted on the property entirely – just within the center of the lot – and the builder moves or alters the footprint, it can impact the foundation over the years and create problems,” Beery shared. “What we’ve seen happen before is the original soil is soft and is bad material, so the developers build up the soil with good soil and compact over the top. But it’s mush underneath, and it can cause all kinds of problems.”

Drainage issues can also contribute to the need for waterproofing foundations and other preventative measures.

“We install drains in the basements, install sump pumps and other interior drainage or interior waterproofing that may be necessary,” Beery said. “We do that in crawl spaces too. Typically, a basement is utilized as a living space or storage, so it’s a major issue if it’s wet. Keeping a basement dry is typically more of a priority for homeowners than a crawl space, but because your wood floor is so close to the dirt because it gets so much evaporation, moisture in the crawl space can do a lot more damage than in a basement.”

Beery emphasized that there are things homeowners can do to prevent or get ahead of an issue before it becomes a major repair situation.

“The most overlooked thing that a homeowner can do is just having clean gutters and getting the downspouts extended away from the foundation,” Beery said. “If there’s a high concentration of water coming over the gutter and along the foundation, it’s a matter of time before it causes a problem.”

Technology has improved many products and systems related to Beery’s industry.

“There is always new technology and products that are changing our industry,” Beery said. “One of the neatest things that has happened recently is the introduction of sump pumps that have apps, so you can monitor your own system. You can get alerts sent to directly to your phone. There are things that can be added to retrofit your existing system to these latest upgrades, and it’s a great way to know if something is going wrong with your system before it gets to be a bigger problem.”

To combat mold and mildew growth, antimicrobial materials and liners are used in crawl spaces, replacing plastic liners that served as a breeding ground for mold and mildew.

“The liners we use won’t support mold or mildew,” Beery stated. “Plastic liners weren’t acting as a source of ‘food’ for mold and mildew, but because it doesn’t dry off and wasn’t treated, it would collect dust particles from the air, and that would be enough to support the growth. That is just some of the technology that has changed over the past few years.”

Acculevel doesn’t just work with new construction or older homes. Its skilled and experienced contractors work on new, old and everything in between.

“We work on everything from older homes to new construction,” Beery said. “When you get into lifting a foundation in some of the 100-year-old homes, sometimes we get into crumbling foundations and/or footings, and it gets to a point where we wouldn’t recommend repairing a foundation that is already deteriorated and not structurally sound. What we do in those cases is refer them to companies that we know and trust who specialize in supporting a house while putting a new foundation in.”

Many people who have concrete slab driveways, sidewalks, porches, patios or steps will experience some settling over the years. Acculevel has a solution for that as well.

“We do slab jacking where we use a polyurethane expandable foam that is like the spray foam that you use for insulation,” Beery said. “We inject it under the slab in a hole that is smaller than my finger – 3/8″ round. It spreads out well, and once it’s under the slap and lifted, it starts a chemical reaction and becomes supportive but lightweight.”

Beery said the previous technique used grout, but the traditional method was heavy and added weight to a situation that was already compromised by weight.

“The foam is a fraction of the weight of grout,” Beery said. “It sets up hard, but it does not add weight.”

Another benefit to this system is the amount of time to repair and get back to using one’s driveway, sidewalks, etc., is cut down significantly.

“We do an average of two to three jobs a day, doing slab jack work,” Beery said. “It is also a fraction of the cost of a new driveway. Plus, if you cut out and repour two to three sections of your driveway that needs repaired, they won’t match the other sections whereas repairing it, nobody is going to know the difference. As soon as we are done with the work, it’s usable. We come in and get it done all in the same day.”

Acculevel also works with a proven system known as Helical Pier installation, a focus of its company with new and commercial construction before the recession in 2008 caused Acculevel to re-strategize and move its focus to residential repair work.

“We have a system called Helical Piers that screw into the ground and will support a foundation,” Beery explained. “You can use this system to lift as well as hold a foundation permanently. It can be put in ahead of pouring a new foundation if you know that the soil is bad. Helical Piers can be put in ahead of time to keep the foundation from moving or settling. An experienced excavating contractor, most of the time, will know just by how soft the ground is whether there is an issue that will require a system like the Helical Piers. There’s a pretty good market for that in new construction and commercial building. Prior to 2008, that was probably 60-70 percent of our business.”

Acculevel uses many products for various situations, and most of the products used have a Life of the Structure warranty.

“Every house and every situation are different,” Beery explained. “Not any one product works 100 percent of the time on 100 percent of the situations. One of the reasons that we’ve stayed independent is that when you are tied up with a franchise or dealer network, you are locked into using the products that they approve, and many are not necessarily the best. They may have started out the newest and best, but we all know things evolve and improve. If you’re part of a franchise or dealer network, you’re only as good as their latest product.”

Basement leaks damage your belongings, produce mold and mildew, and cause extensive damage, such as bowed or leaning walls and/or water intrusion. Acculevel can find the source and provide a solution.

Crawl spaces are common targets for foundation settling, water intrusion, cracking and biological growth. Acculevel has solutions for all these issues.

A cracked or settling foundation can cause a host of problems for the rest of your home. Your home is only as stable as its foundation. Changing soil conditions, age or improperly compressed soils often result in uneven distribution of weight, leading to significant structural damage and several other symptoms. Acculevel can assess the damage and provide you with options.